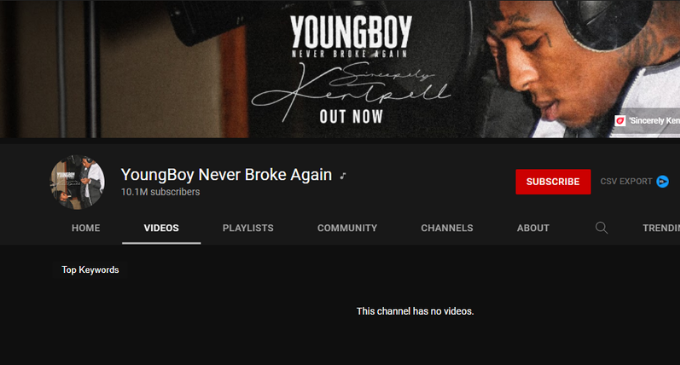 On Saturday, November 27, 2021, loyal fans and interested parties were stunned when the up-and-coming Louisiana rapper NBA YoungBoy’s YouTube videos vanished from the platform.

It was a senseless and concerning act because a massive catalog of the artist’s work was posted on the platform. What’s even more confusing about this purge is why he would do it in the first place. Why would he remove six years of hard work and dedication? It’s no secret that NBA YoungBoy’s 10 million subscriber base and 9 billion profile views should have been making him millions of dollars.

It is still unclear whether the act came from YoungBoy’s end or if his manager, Alex Junnier’s, September prediction came true. According to his manager, the platform would not support YoungBoy because of his current image. However, the mysterious purge could be in response to YoungBoy’s recent legal troubles. The rapper has been on house arrest in Layton, Utah, for a month, after posting a $1.5 million bond. Unfortunately, YoungBoy faces gun charges in both California and Louisiana.

Apparently, these legal issues are related to a September 2020 incident where police were called to the scene of one of the rapper’s music videos. When police arrived, they found at least a dozen illegal firearms and drugs. As a result, YoungBoy was arrested and eventually posted bail on that charge; his troubles didn’t stop there. While in Los Angeles earlier this year, police were trying to apprehend the rapper on a warrant and discovered a loaded firearm in his vehicle. He allegedly attempted to evade the police officers before finally being retaken into custody.

The purge of all his YouTube videos could be a legal tactic designed to keep him out of trouble and remove any video evidence of him possessing firearms. On the other hand, perhaps YouTube decided that they didn’t want him on the platform in his current legal state. For now, the purge has put his career on hold and disappointed his fanbase.

One can only hope that YoungBoy’s situation resolves itself soon. While his fans contributed to his spectacular rise in fame on YouTube, the rapper has many reasons to keep posting his work. In 2019, YoungBoy dominated the platform, clinching the “Top Male Artist” title for several months. In 2021, he was the fifth-most streamed artist on YouTube with 2.5 billion views.

With the talent to outpace artists like Post Malone and DaBaby on the platform, NBA YoungBoy needs to put these issues behind him and move forward with his career.

Who is Andrew Tate ?

Annie Gaybis: A Florida Actress in the Time of Covid