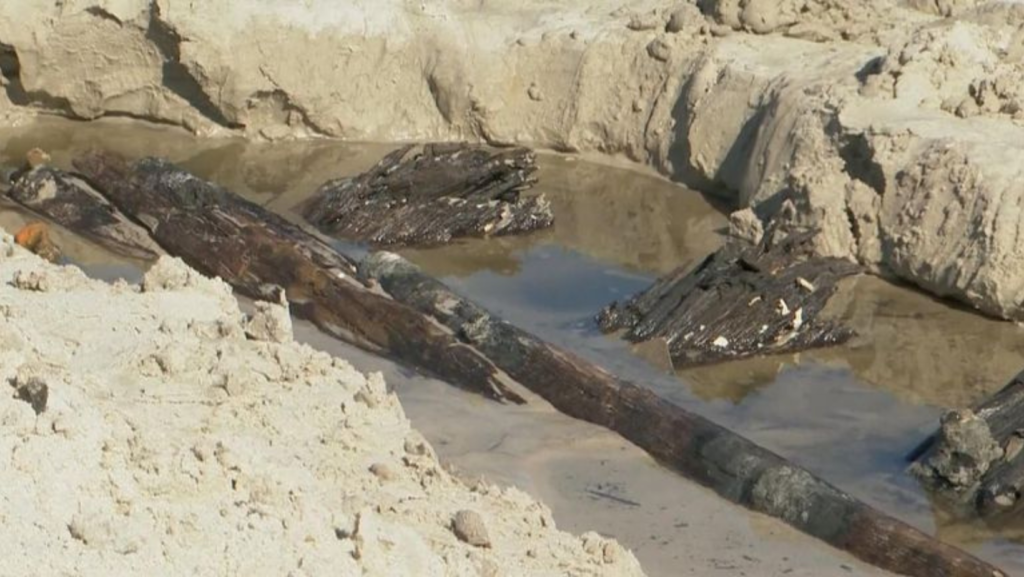 Beachgoers and lifeguards noticed the wooden structure, between 80 ft and 100 ft (24-31 meters), bulging out of the sand over Thanksgiving weekend in front of homes that collapsed into ruins on Daytona Beach Shores last month from Hurricane Nicole.

For several decades, Daytona Beachgoers have been walking over a massive piece of history buried a couple of feet beneath the cool sand of the Daytona Beach Shores.

Underneath the sand, quietly laid a wooden object which was brought to light as a result of the erosion which struck Florida, the sunshine state, a couple of weeks back. It has been reported that Nicole, especially, eroded the beaches so much that the object was brought to the surface area of the beach with an enormous amount of sand washed away from the surface.

According to the Secretary of State Cord Byrd, Florida often experiences such hurricanes and storms that reveal many cultural materials on the beach or offshore, where their collective human story is brought to the forefront. So, it is like a norm to the people of Volusia, Florida.

But, no matter how often this kind of incident occurs in Florida, residents, workers, and beachgoers are always in awe at every discovery made.

This unprecedented erosion, despite the destruction caused, has sparked the flame of curiosity in the mind of people and propelled them to come down the beach, not only to view the unraveling of this mystery firsthand but also to learn more about the discovery of the ancient artifact.

“If something good could come out of those two horrible hurricanes we had, I will take it — and its history,” resident Dean Coleman said.

“I love history, and something that has not been discovered is almost like finding history for the first time, which I think it is,” resident Barry Chantler said.

“It is fascinating how much history is here,” said Debra Smith, who lives close to the site. “We are seeing sand that has not been exposed for at least 50 to 100 years because of back-to-back hurricanes (Ian and Nicole).”

It has been accepted as the norm that after most storms, an unveiling occurs. In a neighboring county, Martin County, which is about 160 miles (257 kilometers) south of Volusia County, Nicole’s wind and waves brought to the surface the skeletal remains of six people believed to be from a Native American burial ground. A historical steamer-style trunk and other items also washed onto beaches.

But this time, no one can remember the ship being previously exposed. And so far, the team has not found any record of a shipwreck at the site, but they will dig in deeper with the newly acquired data.

“I did a quick look in our database, and it is not too much for Daytona, but that doesn’t mean there weren’t ships wrecking here,” Meide said.

This statement gives a hint of the unrelenting effort the team of archaeologists is going to put into coming up with the answers in the mind of those concerned.

“This erosion is unprecedented at this point. I have been on the beach for probably 25 years, and that is the first time I have seen it exposed,” said Volusia Beach Safety Deputy Chief Tammy Malphurs to WKMG-TV.

Archaeologists with the state believed the debris, after uncovering about 20 feet of what appears to be a cargo vessel or merchant ship, the equivalent of a semi-truck, on Tuesday. Many first thought it could be an old dock or pier because it was parallel. Instead, after uncovering the debris field at low tide, the experts believe it is a merchant or cargo ship dating back to the 1800s. Their deduction was a result of the classic ship architecture alongside the arrangement of the wood and iron or brass bolts and fasteners.

A few years ago in St. Augustine, Christopher McCarron, who has been with the Lighthouse Archeology and Maritime Program (LAMP), was part of a dive team tasked with mapping out an area where there might be a lost object.

He has had experience in working on numerous sites with unknown objects, digging them out from several feet under the sand on the beach, and even going as far as diving underwater to help unravel mysteries, for the past 10 years.

“It was a really good day of diving, we could see a few feet in front of us, which is unheard of in St. Augustine. I’m dredging with a friend of mine, and we find a concretion, what looks like a cauldron. And then there is another one right next to it, and another one next it, and then we’re like ‘That’s a shipwreck!’, he said.

He said his joy lies within the discovery and learning about the historical background of the discovered object. He sees it as a time capsule.

“It is the rush to get it done and the rush of getting it done, piecing together the sort of puzzle because that is what is, it is a puzzle for us to figure out,” McCarron says.

The director of the Lighthouse Archaeological Maritime Program (LAMP) from the St. Augustine Lighthouse and Maritime Museum, Chuck Meide on Tuesday was assertive as he said,

“This is a ship and that is just because of its construction. You can see these timbers sticking up, those are massive, and the way they are arranged, that is how you build a ship. It is a wooden-hulled shipwreck. It was held together with wooden pegs and also with iron fasteners.”

It has also been noted in history that there were so many more ships sailing in the 1800s than in the centuries before, hence, more shipwrecks were recorded. And this could be one of the many shipwrecks.
Chris Meide said features of the debris resemble shipwrecks that date to the 1800s.

“If you have a random, wooden shipwreck on the beach, it is most likely a wreck from the 1800s and that is because there were so many more ships sailing in the 1800s than in the centuries before, so there were a lot more shipwrecks,” he said.

It was an awe-inspiring sight as many have come and gone yet never knew of this centuries-old artifact buried deep down in the sand. This is what Meide found exciting, where one moment you are here with nothing but the basics, and the next moment you are at the same place or spot, and something mind-blowing has surfaced.

After Hurricane Ian caused erosion which made homes on Volusia County’s coastline vulnerable. It came in late September to Florida’s southwest coast and exited into the Atlantic Ocean over central Florida.

This undoubtedly paved the way for hurricane Nicole in early November which devastated much of Volusia County’s coastline, destroying about a half-dozen homes crumbling into the sea while another 25 single-family homes were declared structurally unsafe and evacuated.

“It is a rare experience, but it is not unique, and it seems with climate change and more intense hurricane seasons, it is happening more frequently,” Meide said of the unearthed artifact.

While a team of ten archaeologists investigated the debris, they handled it with extra care, fully aware that any effort to dig the ship up would ultimately destroy it. The material with which the ship was built would be extremely fragile since it has been submerged in water and covered with sand for several decades.

The archeologists believe the ship is buried 5 feet into the ground as at discovery but must have been deeper than that owing to the enormous amount of sand Hurricane Nicole carried away. So, instead of forcefully digging with machines, they made use of shovels, and hand trowels before eventually settling to carefully use their hands to scoop up the sand in other to form a trench stretched across the surface area of the revealed artifact.

The team believes the wooden sailing ship’s full length is probably 80 feet to 100 feet and 20 feet to 25 feet wide. They have found frames, or rather ribs of the vessel, ceiling planking, and timbers that would have run the full length of the ship.

Although the structure’s characteristics point to a shipwreck, more details about its history are difficult to pinpoint, Meide said, “We are assessing it, to the best we can, to try to understand what it is,” he said. “We want to understand the nature and condition of the wreck itself. Is it in good shape? Has it deteriorated? How much has survived? We want to understand its cultural, and historical parameters, how old it is, what country it comes from, and what its purpose was. Those are basic questions when it comes to a shipwreck.”

Even identifying the ship by its original name is not quite feasible at the moment. It would require more in-depth research into the database of all shipwrecks to try to find a possible match or precise information.

So, all the archeologists want to do is photograph, measure, and document it for history. They have been able to get sketches, pictures, and even samples of the wood to help in their study and research. With the wood samples, they can figure out the origin of where the ship comes from and that could help by finding the tree from where the precise material used to build the ship came and trying to figure out what region it sailed from and what kind of wood it is to help them fully unravel this mysterious shipwreck.

The team says it will continue to uncover the shipwreck. Meanwhile, they are making intentional plans to go through maritime and insurance records to identify the vessel. Meide said the presumed ship did not break into a bunch of pieces which is a good thing, but it looks like “we have the intact maybe bottom or side portion of a big sailing vessel.”

Asides from the fact that removing artifacts as such from an archaeological site without legal authorization is considered a third-degree felony, the initial discovery that had been brought to the surface on the Daytona Beach Shores two weeks ago has been buried again by sand from waves.

Working at a snail’s speed will not get the job done, hence, the quick extraction of as much data and information from the surface area is revealed. The tides promised to return to cover up what it revealed.

Director Chuck Meide said there are no plans to take the ship out of the Daytona Beach shores, not only for the cost which would run into millions of dollars or more, but the environment it currently is is most appropriate for the preservation of the debris. The little that was uncovered was barely enough to make a sketch, take its measurements and possibly take some wood samples to test for its origins.
Mother Nature is trusted to take care of the wreck with the wet and dark sand she used to keep concealed over the decades.

The archaeology crew admonishes and discourages any beachgoer, resident, or worker to stay away from the discovery site like it’s a crime scene. No touching or trying to remove anything from the area.

Secretary of State Cord Byrd visited the site on Tuesday. He said it’s an important historical find but also commented on the critical erosion that exposed it, saying the state is committed to building the beach back.