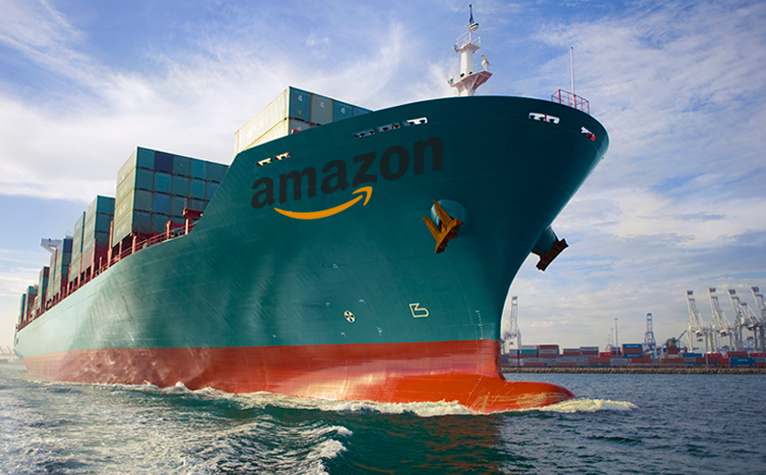 With the holiday season approaching, it’s no surprise that customers will be rushing to bag as many gifts as they can before the intense seasonal shopping chaos unleashes. And how is every business dealing with that kind of potential pressure? For now, Amazon is already prepared! The online shipping giant is again back with a new way to get ahead of every other competitor in the market! Now with the introduction of Amazon’s very own cargo ships, which are fueled and secured by new security measures, nothing, not even the seasonal shopping rush, can put a full stop to any delivery!

It is no surprise that for a long time, Amazon has been busy with upgrading its shipping mediums, chartering private cargo ships, producing its top-notch containers, leasing planes to take better control of the complex shipping journey of online orders. Due to these early majors, Amazon can stay ahead of the game. As the holiday season is at the brink of its arrival, retailers all around the world are panicking over potential supply chain chaos. Amazon is spending large amounts of money to avoid any waiting time for the availability of dock space and workers at one of the country’s busiest ports, namely those of Los Angeles and Long Beach. As sighted, there are several vessels, around 79 in number, already docked at Los Angeles for the past forty-five days.

According to Steve Ferreira, an ocean freight analyst, the most recent cargo of Amazon they are waiting for as least two days in the harbor. Others, too, have been waiting to come into the harbor. But that fuel’s the shipping giant chances of staying ahead of every other shipment company. Moreover, By contracting private cargo vessels for shipments, Amazon will have sound control of wherever its supplies are to go, all while avoiding the busiest of ports in the country. Ferreira further added that Amazon is playing smart by implementing one of the most “niche strategies I believe the market needs to employ.”

Furthermore, as early as November, extensive shipment activity was already seen rolling into the harbors. Embezzled with Amazon logos, containers rolled in docks, some empty, others full. Those who were empty were soon filled to the brim with the likes of fire pits, toys, artificial Christmas trees, pottery, laptop sleeves, and tons of other goods brought via sea directly from China. This is yet another example of how Amazon keeps its customers satisfied while other retailers are scrambling to fill up their shelves for the holiday season.

Moreover, to tackle any obstacle standing in the way of streamline shipment, Amazon took to contracting the Olive Bay! Costly measures, indeed. After the lease, the company dispatched the ship soon dispatched it to a sleepy harbor not far from hometown Seattle. This measure is taken apart from its infamous Everett, docked at the renowned Port of Houston. Such expensive and extreme actions have given much-needed confidence to the Amazon executives, ensuring them that they’ll have sufficient inventory to reach yet another, potential, record-breaking holiday shopping occasion! This potential record is disclosed as per Adobe predictions that U.S. buyers will spend at least a large sum of $207 billion online, which adds up to 10% from last year. While many retailers have turned to advertise “shop early” advice, Amazon has taken to “shop whenever you want even at the height of the season!” a complete shopping giant kind of confidence!

Furthermore, with chartering ships comes a teeming number of workers. As stated by reports, the shipping giant has hired a total number of 150,000 U.S. seasonal workers! These workers will be taking up an enormous responsibility of picking, packing, and shipping items, all this while enjoying an increased salary and being offered to sign bonuses of up to $3,000. Increased workforce means that the company can dispatch half-full trucks to locations on time. All this caters to Amazon’s reputation even in the intense holiday season. Last year, the company’s reputation was burnished by being the sole lifeline during the Covid19 pandemic, and now it has a grand opportunity to become infamous again.

With that being said, with the arrival of new ships and an immense surge in cargo, Amazon faces a security threat. It is relatively easy to target shipments and hack the system. To avoid such cyber-attacks, Amazon has introduced new security measures. According to Schmidt, “As the adoption of containers skyrockets, so does the need for easy-to-manage and scale container security.” Amazon wed services heard the message clearly and are now deploying their cloud provider, who is working on new “feature sets that will address container environments.”

For now, as per reports, new container threat detection characteristics will be launched in the first quarter of 2022, and soon will collaborate with Amazon GuardDuty threat detection assistance to Amazon Elastic Kubernetes Service (EKS) audit logs. “This will provide customers intelligent threat detection for their container workloads — scanning for unusual resource deployments [and] things like malicious configuration changes, or escalation of privilege attempts,” Further added by Schmidt.

Apart from security measures, Amazon is seeking to extend its marketplace. The company can launch a brand new, innovative containerized software from ISVs. With this technology, customers can enjoy security on their products by subscribing to any authorized containerized software package. The programs will be extended to Amazon ECS, Amazon EKS, or other self-hosted programs like Kubernetes cluster administering on the customer domain. In a report, the company drew upon this innovative notion by stating that this “ultimately enables customers to use a single catalog to find container images regardless of where they eventually plan to deploy.”

Are Construction Material Prices Going Down?

What Do Digital Marketing Companies Do?

How Can Cryptocurrency Help Small Businesses?

What is Truist Bank? – Everything You Need to Know