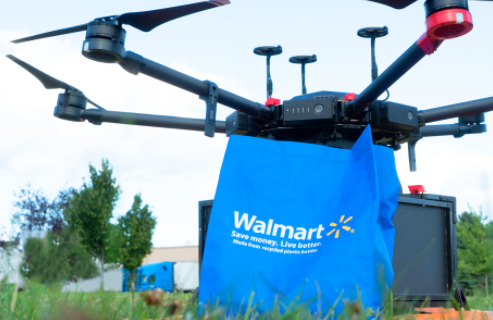 With the onset of the global coronavirus pandemic, technology has proven to be a fruitful medium of expanding business and maintaining connections. This statement’s evidence is visualized in the introduction of drone delivery services launched by Walmart in Arkansas.

One can already witness parachute-laden packages descending from a self-governing Zipline plane to a “hand-selected group of recipients.” And this is just the beginning, for Walmart is already expanding those drone shipments in another feasible way which will enable customers living within a 1.15-mile radius to enjoy direct deliveries from a base station near the branch in Farmington.

And this new endeavor is possible due to the collaboration with DroneUp, an innovative startup out of Virginia that caters to drone technology and services. As per the headlines made on November 22nd, In the coming months, Walmart will also implement drone delivery sites in Rogers, AR, and Bentonville, AR.

For now, this unique service will operate seven days a week from 8 a.m. until 8 p.m. It will be assisted by flight engineers who will control and supervise each delivery to secure the order’s arrival.

This isn’t the first time that Walmart has partnered up with DroneUp to deliver supplies. Last year during the peak pandemic, Walmart had teamed up with DroneUp to transport essential medical supplies and COVID-19 test drone deliveries in a one-mile radius of stores in various areas like North Las Vegas and Cheektowaga, New York.

This effort was acknowledged by the Walmart CEO and President John Furner, who stated earlier this year that, “after safely completing hundreds of drone deliveries from Walmart stores, we’re making an investment in DroneUp to continue our work toward developing a scalable, last-mile delivery solution.”

This kind of modern initiative is much needed during the coronavirus pandemic. Despite the drone delivery services’ announcement, people should realize that this kind of start is just the beginning, nearly a baby step— as for now, the DroneUp’s conventional quadcopters only transport goods within a one-mile radius of a Walmart store.

Moreover, all three of certain stores are within the same domain that Zipline previously announced would assist. The deliveries will be safely transported as Zipline has devised their drones to lower the packages down on cables rather than dropping them from the sky.

The customers can enjoy fast and safe delivery. All they have to do is place an order and wait. Team Walmart will pack the items inside a uniquely composed box with a parachute. Next, the package is scanned, a parachute is installed to ensure landing, the package will then be loaded into the payload bay and wait for the batteries to be installed into the drone after inspection, and voila!

The drone will take flight and go to its destination. It’s easy and has already proven to be economical, for this drone delivery service is free! Additionally, as stated by DroneUp: customers can order all sorts of items and enjoy fast deliveries as swiftly as 30 minutes (of course, typical delivery time varies distance-wise). Plus, there’s no waiting time as each station can launch several flights per hour.

“When we invested in DroneUp earlier this year, we envisioned a drone delivery operation that could be quickly executed and replicated across multiple stores,” as declared by Tom Ward, senior vice president of last-mile at Walmart US “Opening our first hub within months of our initial concept showcases DroneUp’s ability to execute drone delivery operations with speed safely. We’re already hearing great customer feedback at our first site in Farmington, Arkansas, and look forward to opening additional locations.”

Prior to this announcement, Walmart had advertised the introduction of fully driverless trucks that will administer deliveries between a Walmart dark store and a Neighborhood Market in the company’s hometown of Bentonville, Arkansas. Like drone service, Walmart has commented that this is the first time a truck has operated independently of any driver on a commercial delivery range.

In cooperation with drone technology and services provider, DroneUp Walmart drone delivery is publishing three full-time DroneUp airports known as the “Hubs.” DroneUp press release statement echoes these points stating that they had already launched their first order at a Walmart Neighborhood Market in Farmington, Arkansas. These “hubs” will operate from 8:00 a.m. ­– 8:00 p.m, seven days per week, catering delivery to eligible Walmart customers in a speedy time of just 30 minutes!

The two companies’ investment in the novel shipping experiment remains undisclosed. Neither have explicitly stated the exact price. According to the Walmart CEO and President John Furner, who stated earlier this year in his speech that “The trial demonstrated that we could offer customers delivery in minutes versus hours. Now, after safely completing hundreds of drone deliveries from Walmart stores, we’re making an investment in DroneUp to continue our work toward developing a scalable, last-mile delivery solution.”

As mentioned above, for now, these drone services are available to ship supplies within a 50-mile radius of Pea Ridge, Arkansas. However, customer feedback and reviews will give an insight to the shopping giant as to whether or not to expand nationwide; Walmart and Zipline are already analyzing their data. According to Tom Ward, manager of Walmart’s Last-Mile delivery operation, he states that if this service proves to be feasible for the customers, then “we’ll scale it so in future holidays this is probably going to play a great part in getting things in a hurry,”

This thought is echoed in Zipline’s belief, based on forging commercial drone delivery as more accessible for the nation. It is only a matter of time before this vision is translated into a reality! Due to these motivations, the current service is free, while both Walmart and Zipline gather data and feedback to see if this initiative is something people want.